The Bay Area in Northern California partook in the U.S. Japan Sister Cities Bell Ringing Ceremony this year, to celebrate the 75th anniversary of the atom bombing of Hiroshima and Nagasaki.
Their local news channel wrote about their event, along with an interview of people who were directly affected by the bombings in Japan.

See below for the article, or click on this link here. 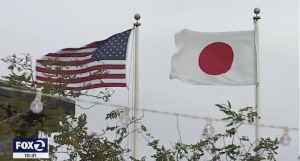 SAN FRANCISCO – The 75th anniversary of the U.S. atomic bomb attack on Hiroshima was marked with a ceremony in Japan at 8:15 a.m., the moment of the world’s first nuclear attack on Aug. 6, 1945.

At the same time around the world, some 50 cities in the United States held bell-ringing ceremonies as part of the U.S. Japan Sister Cities Bell Ringing Project.

In San Francisco, a bell rang through the Peace Plaza Japantown at 4:15 p.m. in solidarity with people in Japan and honoring the estimated 140,000 lives lost in Hiroshima. More ceremonies are planned in the Bay Area for Saturday at 7:02 p.m. to coincide with the Japanese memorials for the 74,000 people killed by the U.S. bombing of Nagasaki August 9, 1945.

“I was three years old,” said Seiko Fujimoto, a Bay Area resident who was just a child when she was sent to stay with her aunt and uncle in Hiroshima because it was thought to be safer than other cities.

When the bomb detonated, her aunt, uncle and cousins were killed. She was left to care for her one and a half year old brother who later developed leukemia. After the bombing, they eventually reunited with their parents, but carried a lifetime of physical and emotional scars from the horrible images of death and destruction.

“What did we do wrong? We didn’t do anything wrong,” said Fujimoto, who says she has tried to share her story with children over the years to help them understand the impacts of war.

Reverend Nobuaki Hanaoka, another Bay Area resident, was an eight-month-old infant when Nagasaki was bombed. He escaped death but says he grew up with fear and faced discrimination in Japan from people who worried about the ill effects of radiation that the bomb survivors had endured.

“We were told if people know you are a survivor from Nagasaki a-bomb, you may not be hired or no one will marry you,” said Rev. Hanaoka.

Fujimoto and Hanaoka are among the few remaining hibakusha, which means atom bomb survivor in Japanese They are part of an entire generation, now dwindling, who were firsthand witnesses to the devastating impact of a nuclear weapon.

“This may be the last major milestone that the hibakusha, the survivors of the atomic bomb to tell the world of their story and their urgent desire for peace,” said Kenji G. Taguma, President of the Nichi Bei Foundation, who helped organize the event with the Japanese American Religious Federation.

At the San Jose Buddhist Church Betsuin, participants rang the bell 75 times Wednesday, as people in San Jose’s sister city of Okayama watched from Japan through a video conference.

“Today it is extremely important we honor those who lost their lives,” said Peralez, emphasizing the importance of continuing the quest for peace.

The ceremonies, coming amidst the coronavirus pandemic, forced some events to be canceled or modified.

In Millbrae, the ceremony was kept small, with masks and social distancing. Mayor Reuben Holober, Deputy Mayor Ann Schneider, a member of the Rec Center and members of the Millbrae Sister Cities Commission joined together to mark the moment.

Others, such as the ceremony in Sebastopol, went entirely virtual through video conferencing, with presentations and speeches from local officials and the sister city of Takeo in Japan.

Many of the ceremonies honored the bonds of peace and friendship with their sister cities in Japan.

Many also, called for new generations to remember the stories of those who survived and the lives that were lost.

“How foolish it is for us to compete for better, stronger weapons, because there is no winner in a nuclear warfare,” said Rev. Hanaoka.